Ben Winters’ THE LAST POLICEMAN trilogy, published by Quirk, will be coming soon to a screen. Interestingly, Fox decided to flip genders on the lead detective, and will use the title THE LAST POLICE.  Time to read the books, if you haven’t already.

WE SHARE THE SAME SKY, by Rachael Cerrotti, now in print, audio and ebook. 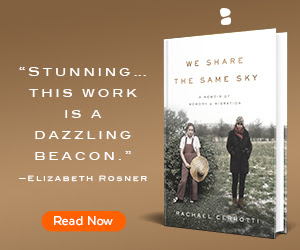 Today Ben Winters‘ THE QUIET BOY hits bookstore shelves. From the inventive…entertaining and thought-provoking” (Charles Yu) New York Times-bestselling author of Underground Airlines and Golden State, this sweeping legal thriller follows a sixteen-year-old who suffers from a neurological condition that has frozen him in time—and the team of lawyers, doctors, and detectives who are desperate to wake

him up.
I am so grateful to the incredible team at Mulholland Little Brown whose brilliance, grace and vision represent book publishing at its finest.
Congratulations

Men I’ve Never Been (University of Wisconsin Press, Living Out Series)/May 2021) recounts Michael Sadowski’s odyssey as a boy who shuns his own identity—and, ultimately, his sexual orientation—in order to become who he thinks he’s supposed to be. Beginning with the memory of a four-year-old sitting in a dingy dive bar, sounding out newspaper headlines while his boasting father collects drinks from onlookers, each chapter highlights a different image of manhood that Sadowski saw at home, at school, or on television—from sports heroes, hunters, and game show hosts to his charismatic but hard-drinking father. As he learns not to talk, laugh, cry, or love, he retreats further behind a stoic mask of silence—outwardly well-functioning but emotionally isolated, sinking under the weight of the past.

Through wrenching tragedy and tense, life-threatening challenges, Sadowski learns to find love, purpose, and healthy self-regard. In coming to understand his identity and his place within his family, he

meditates on the power of real human connection and comes to grasp the damage of his troubled upbringing and the traumas caused by toxic masculinity. By turns comic and tragic, this nuanced memoir uncovers the false selves we create to get along in the world and the price we pay to maintain them.

“A powerful, beautiful sock in the stomach of a memoir. It’s filled with living, breathing, three-dimensional people, settings that are so vivid they have a cinematic quality, refrains and reprises that give the whole story a musical coherence. The ending will leave readers in a state of—I don’t know what—grief? joy? wonder? hope? All of those and more. I can imagine this book changing lives.”—Domenica Ruta, author of the memoir With or Without You

“A compelling and exceedingly well-written memoir that is, at times, as heart-wrenching and hilarious as any book I’ve read in a very long time. Sadowski is a craftsman; there’s so much earned empathy and experience in here that it’s hard to overstate.”—Jared Yates Sexton, author of The Man They Wanted Me to Be

Michael Sadowski is an award-winning writer and author of several books, including In a Queer Voice, Safe Is Not Enough, and Adolescents at School. He is an administrator and professor at Bard College.

THE PROMISE OF THE PELICAN, Roy Hoffman

A defense attorney in Alabama—a child Holocaust survivor–comes out of retirement to defend a young Honduran man accused of murder.  At once a literary crime novel and an intergenerational family drama, the novel is set in the multicultural South where the past and present collide. (Arcade CrimeWise/World Rights/Spring 2022)

Filmmaker and NYT-bestselling author Simcha Jacobovici and maritime archaeologist Sean Kingsley’s ENSLAVED, the 400-year history of the transatlantic slave trade as revealed through the journeys of six sunken ships that traveled to the New World; a docuseries of the same name, featuring actor and human rights activist Samuel L. Jackson is currently on Epix/BBC and Candadian Broadcasting (Pegasus, Spring 2022, World English)

Pepperdine University Fletcher Jones Chairman of Western Culture, classicist and translator Philip Freeman’s HANNIBAL, best known for his audacious crossing of the Alps with battle elephants to bring war to the heart of the Roman Empire, the author draws on the original texts and the latest archaeological investigations to reveal him as a skilled diplomat, politician, master of organization and leader of men.  (Pegasus, World English, Spring 2022)

INSIDE JOBS: Tales from a Time of Quarantine, Ben H. Winters (Audible Original)

Three offbeat stories of crime and conundrum, set in the present moment, from The New York Times best-selling, Edgar Award-winning author of Underground

Inside Jobs: Tales from a Time of Quarantine includes:

The Crimson Parrot
It’s not easy masterminding the crime of the century when your whole gang is working from home. A high-stakes tale of larceny, deception, and teleconferencing.

The Cape House
As the world shifts around them, two estranged brothers end up in their childhood home. But it’s the memories they unearth that will change them forever.

Stop Motion
With endless time on her hands, an apartment-bound young woman gets to all the hobbies she’s neglected—martial arts, playing the sax, photography…and solving a murder?

Author of the award-winning THE LAST POLICEMAN novels and bestselling UNDERGROUND AIRLINES Ben Winters’s INSIDE JOBS, a trio of crime stories set during the age of quarantine. (Audible Originals, World rights, Summer 2020).