Stuff in the ‘Pocket Star’ Category

Gabra Zackman is an actor, audio narrator, and now author of Game On (Pocket Star, digital release, April 2015), the first in a projected series of novels about the “Bod Squad” investigators.  Part caper, part romantic comedy, this hilariously entertaining book in the Bod Squad series features a sassy and sexy undercover operative, Susannah “Legs” Carter, and her Ocean’s Eleven–style team of private investigators. The titles are:  GAME ON (#1),  ALL IN (#2), and DOUBLE DOWN (#3),  all available as e-book (Simon & Schuster) and in audio (Audible).

I started acting in grade school with a rather extraordinary turn as Oedipus Rex, wearing our kitchen tablecloth as a toga.  I became really involved in the theatre in summer camp, where they cast me because I was loud enough to be heard in the rec hall, and wowed the kids with my 12 year old version of Yenta in Fiddler on the Roof.  I went to Northwestern, and couldn’t concentrate on anything other than 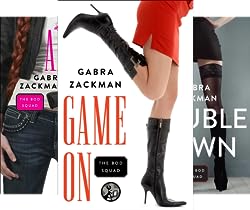 the theatre and rehearsing scenes long into the night.  I made some extraordinary contacts there that have supported me ever since.

After being in New York for a bit, and being told I was a “classical actress”, I decided I’d better know what I was doing when I entered a room.  I went to graduate school at The Academy for Classical Acting at The Shakespeare Theatre in DC, and had an eye opening experience.  Since graduating, I have had the privilege of working regularly in classics, as well as in contemporary works and new plays.

I have also been able to use my language skills in the field of audiobooks.  When I’m not working out of town I work in New York at a number of studios, and have recorded over two hundred books to date. I work in a wide variety of styles:  I have won awards for children’s books, been a best seller for romances, and had regular contracts in both non-fiction and sci-fi.  In addition, I have worked on a number of textbooks and online guides.

I have been on TV in “Law and Order”, “Law and Order: SVU”, “All My Children”, MTV’s “Made” and commercials.  I have been on film in Law Abiding Citizen, as well as in independent and student films.  I am looking to continue to expand my on camera experience, and take the work I have come to be known for on stage to the screen.

I have begun writing my stories, and writing a romance novel, and have a contract with a wonderful New York literary agent.

r work, and I believe this is the best of both worlds.

It is a great joy for me to get to do what I love.

For more about Gabra, visit www.gabrazackman.com

Categories: Authors
Tags: All In, Double Down, Gabra Zackman, Game On, Pocket Star

Debut author and actor Gabra Zackman knows romance. Game On was inspired by the more than 100 romance and women’s fiction titles she has narrated for audio. Zackman divides her time between her native New York City and Denver, Colorado. Audible will release an audio version later in 2015.

A projected series of humorous romantic suspense for the 20 and 30-something audience by debut author, actor and popular audiobook narrator Gabra Zackman.  The first of three books, GAME ON, features sassy and sexy undercover operative, Susanna “Legs” Carter and her investigative team.  Part caper, part mystery, hilarious and hot, the series will appeal to readers of Gemma Halliday and Kyra Davis.   (World Rights, Pocket Star/Simon & Schuster, 2014-2015)