The Best Law Book of the Year 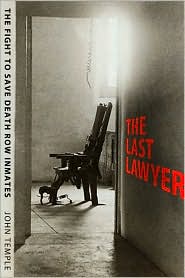 ons to John Temple, author of The Last Lawyer: The Fight to Save Death Row Inmates, which has won The American Society of Legal Writers’ 2010 Book of the Year.

The book follows the story of Bo Jones, and begins in 1987 when an elderly bootlegger was shot to death in Duplin County, a poor rural region in eastern North Carolina. Nearly four years later, Bo’s ex-girlfriend–a sometime prostitute named Lovely Lorden (really)–told police that he was the killer, and on her testimony alone, Jones was convicted and sentenced to death. The Last Lawyer is the true inside story of how a disheveled legal genius named Ken Rose and his diverse band of investigators and lawyers thwarted Bo’s death sentence. Readers get to know Ken’s staff, like Sara, a social-worker-turned-investigator, witnesses like the lazy prosecutor who first tried Bo, Ken’s opponents like the colorful and sharp DA as well as Bo himself, a man who is difficult and delusional but a man who must be saved.

Intrigued? Find out more at the author’s website: http://johntemplebooks.com/index.php